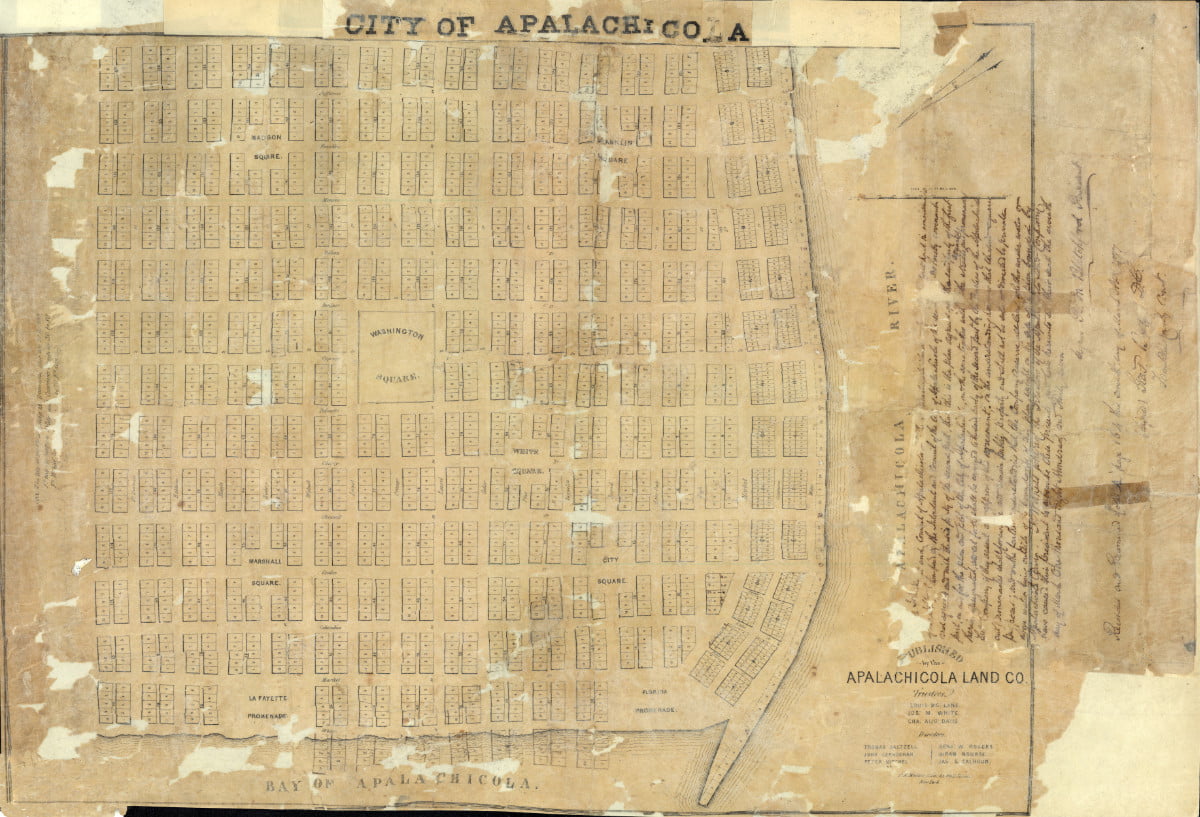 Apalachicola’s layout was organized in the 1830s by the Apalachicola Land Company. The original plan, patterned after the City of Philadelphia, featured a one-mile square grid with a large central square and smaller square surrounding it. Each of the town’s squares was originally designed to serve as neighborhood communal areas - open and available for public use.

Apalachicola’s Squares are Key to the City’s Historic District

All six of Apalachicola’s historic squares (City, Chapman, Gorrie, Franklin, Madison, and Washington) fall within the Apalachicola Historic District which contains a remarkable number of structures built during the town’s most prosperous times in the nineteenth and early twentieth century. The major portion of the Historic District is residential with single-family dwellings predominating.

Generally, the residential area is oriented north-south along Fifth and Sixth Streets and has the highest concentration of pre-1860 buildings. The area west of Sixth Street along Bay Avenue and Avenues B, C, D, and E, developed around the turn of the century. Several churches and public and parochial school buildings can be found here. Much of the commercial area along Market and Commerce Streets dates from the early decades of the twentieth century.  The riverfront once featured dozens of three-story brick warehouses, used as storage warehouses during the early 1800s to support the bustling river commerce trade.

Squares were Part of the Original Plan

Apalachicola's Historic squares are identified as Washington Square, Gorrie Square, Chapman Square, Franklin Square, Madison Square, and City Square. Four of the squares are arrayed in a square around the center. The central square - Washington Square - is the largest, covering a four-block area. City Square is Apalachicola’s sixth square, and it is uniquely set off from the organized plan of the other five.

Historically, buildings were oriented toward these squares on all sides, but over time, this feature of the city’s design was lost. Currently, only Trinity Episcopal Church at Gorrie Square upholds this part of the city’s original plan.

Although development patterns have altered the original design and use of the City’s squares, much of the integrity of these squares remains.  It has been the expressed intent of City leaders, historic planners, and preservation enthusiasts to preserve the squares as much as is possible.

Gorrie Square is one of the original six city squares in Apalachicola. The original name for the square was City Square as identified on the 1834 Apalachicola Land Company Map. The square name was changed in the early 1900s- to honor Dr. John Gorrie, the Apalachicola physician (1803-1855) who was an early pioneer in the invention of the artificial manufacture of ice, refrigeration, and air conditioning. Dr. Gorrie was granted the first U.S. Patent for mechanical refrigeration in 1851.

In 1906 a steel water tower for Apalachicola’s first water system was erected at the center of the square. The tower served the water needs of the City for 79 years until it collapsed during a hurricane in 1985.

Trinity Episcopal Church is one of several notable landmarks on Gorrie Square. In 1838, the white pine church building was cut to measure and assembled in sections in White Plains, New York, and then traveled by schooner to Apalachicola where it was reassembled and completed in 1840.  During the Civil War, the church served as a sanctuary to the citizens who remained in the city - the elderly, the wives, and children of Confederate soldiers.

In 1899, Dr. Gorrie was honored for his invention of the ice machine with a monument to his achievement. The monument is located in the northern corner of the square.

In 1956 ground was broken on the southern corner of the square for a museum to Dr. Gorrie.  The museum was completed and dedicated in 1957. It is presumed that is also when Dr. Gorrie’s remains were transferred from Magnolia Cemetery to Gorrie Square. His grave can be found in the eastern quadrant of the square - directly across 6th Street from the museum.

City Square is located southeast of the central Washington Square and borders the historic Chestnut Street Cemetery. The Square was originally named White Square, as represented on the 1834 Apalachicola Land Company map. The Square was renamed City square in the early 1900s – presumably about the same time the original City Square, located at the intersection of 6th and Avenue D, was renamed Gorrie Square in honor of Apalachicola physician Dr. John Gorrie.

Today, City Square is best known for its connection to the historic Chestnut Street Cemetery which borders the eastern quadrant.

The Chestnut Street Cemetery is the oldest burying ground in Apalachicola and is the burial site of many individuals connected with the history and development of the town and area.  Approximately 540 marked graves are located in the cemetery, but there are many more grave sites that are unmarked. A variety of tombstones decorate the cemetery, from simple vertical slabs from the 1830s to elaborate marble monuments.  A few graves are marked with simple wooden crosses or a blanket of shells with no names.  In 1912 the local chapter of the United Daughters of the Confederacy marked the graves of all the Civil War veterans in the cemetery.  There are at least 79 Confederate veterans and 7 Union veterans buried in the cemetery.  By about 1900 there were no more spaces remaining in Chestnut Street Cemetery and the City of Apalachicola opened Magnolia Cemetery at the north end of town.  The only people buried in Chestnut Street Cemetery after that time were people who had existing family plots in the cemetery.

The central square of Apalachicola is Washington Square. It is the largest of the City Squares covering a four-block area. Washington Square is unique in that it is completely bounded by streets. The other squares have been changed over time from their original configuration with traffic routed around the squares to being now bisected with two streets crossing the squares.

Washington Square once served as the site of the Franklin County Courthouse built on the site in 1892. The imposing brick edifice served as the seat of county government until the county constructed a new courthouse at the foot of the Gorrie Bridge in 1940.

During the early 1950s, the former courthouse building also served as the Franklin County Health Department.  The building remained until 1957 when it was torn down to make way for the construction of the City’s current hospital – George E. Weems Memorial Hospital.

The late 1800s also saw Washington Square used as the site of the City jail, relocated to the Square from its original location (corner of 8th Street and Avenue C) in 1892.  The jail, which also has the dubious distinction as the town’s official public hanging area, occupied Washington Square until 1949 when it was replaced with a new facility downtown. Portions of the Washington Square parcel have been sold over the years and are in private ownership.

Franklin Square occupies the Northeast corner of the City’s Historic District. Early depictions show this area, referred to as “The Hill,” as having a prominent rise in elevation up from the commercial warehouse area that lined the river. Although large and elegant residences are scattered across the Hill, the more predominant styles that exist here are more modest Gulf Coast and Victorian cottages and Craftsman and vernacular styles of architecture. The area also contains a scattering of shotgun houses.

Franklin Square borders one of the town’s unique examples of mission-style architecture – the Holy Family Center. The Holy Family Center was built in 1929 as a Catholic school for the black population of Apalachicola.  The mission-style building has four classrooms and an auditorium. When the parishioners outgrew their church the school auditorium was converted to a church.  The building continued to be used as a school and church until 1964. Afterward, the building was used as a community center until the building became unsafe. In 2004 the City of Apalachicola obtained the building from the church.  The building was renovated into a Senior Citizens Center and opened in 2012.

Receive notices and alerts in your inbox!